They found the dog laying in a hole in the snow unable to get up. Not knowing what was wrong, they rushed him to the vet. When they found out what happened to him, it broke their hearts.

Rescuers were notified of a dog that was just lying in the snow and not getting up. Knowing the dog could easily freeze to death, they rushed in to help.

When they got there, they saw a dog they guessed to be 7 or 8 years old. The dog looked at them with the saddest eyes, just pleading for help. He was stuck in the snow and in very bad shape.

They had no idea what was wrong with him, but they quickly got him to the vet. His look of despair broke their hearts, the dog was close to giving up. Yet, they still didn’t know if they got there in time.

At the vet, the vet informed the rescuers that the dog had been shot. There was a bullet lodged in his spine, which is why he couldn’t stand up. He was very weak, and his back legs had atrophied.

They wanted to help the dog in the best way possible, but it was determined that surgery was not the best option. So, they transferred the dog, they were now calling Mishka, to a rehab hospital so he would begin a gentle exercise program to help him overcome the weakness in his legs.

It wasn’t easy for the dog. He was in pain and very weak. After his therapy, he could only lie down. Despite all their efforts, the doctors still were not sure if the dog would ever overcome his injury.

But despite it all, he didn’t give up. Mishka kept on fighting. And a month later, he experienced movement in his legs for the first time. This was great progress for the pup so they decided to get him a wheelchair so he could move around easier.

He continued his journey toward recovery, so his therapy team did too. Despite all the pain, weakness, and harsh reality the dog faced daily, he never stopped trying to get better. He finally reached the point where he could try to walk without his wheelchair.

Mishka had a way to go but his life was far better than it was. His strong spirit kept him alive when it would have been so easy for him to give up. We hope you enjoyed his rescue story. Please feel free to share it with your friends.

Anyone whose been spurred by a rooster knows they can …

Two young cousins traveling through one of the hardest hit … 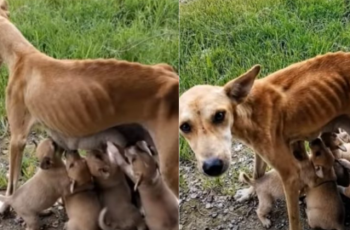 One of the most horrifying things we can witness in …