Thanks to the actions of some very kind and ingenious people, a starving stray dog now has a forever home.

When Amanda Guarascia and Dylan Parkinson learned about a starving and scared dog living alone at the Evans Creek campground in Washington State, they decided to try to rescue him.

They drove to the campground and the dog was sitting exactly where they were told he would be.  Unfortunately he was so scared that they couldn’t get near him.  They tried to tempt him with food but that didn’t work so they left to go buy some hotdogs.  They returned with the hotdogs but the scared dog still would not come closer.

They stayed there for hours before leaving at 3 a.m.  After leaving, they came up with a clever new plan.  The next day they returned and thankfully the dog was still there.  Since food didn’t work the day before, they decided on this day they would appeal to the dog’s compassion.

Amanda described on Facebook the unique idea they came up with and the events that led to his rescue.  She wrote:

“I got down on the ground with my back to the pup, who we have decided to call Bear (okay, Baby Bear to be exact) and slowly started crawling backwards towards where he was laying.”

Her plan was to pretend to be hurt to see if she could coax Baby Bear closer.

“I started whimpering and yawning (which is a calming signal), and continued to slowly get closer and closer until I was rested up against the sweet little Baby Bear! (At one point, he got up to try to find us shelter because he saw me as a pathetic human girl that had no survival skills, he sort of took me under his wing!)”

Her plan worked and she was not only able to get close to Baby Bear, she was able to pick him up and hold him.  They took him to the vet to get him help, she wrote:

After being cared for at the vet, Baby Bear was taken to Useless Bay Sanctuary, who found him an amazing foster family.  Soon after, he found his forever home and from the looks of his pictures, is very happy.

No doubt that Amanda and Dylan saved his life with their patient and unique rescue.  We’re sure Baby Bear is very grateful for all the compassion they showed him on that day.

Please share his sweet rescue story with your family and friends. 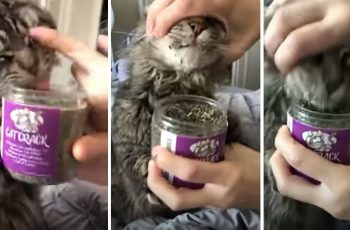 Cats are notorious for being finicky but apparently this cat … 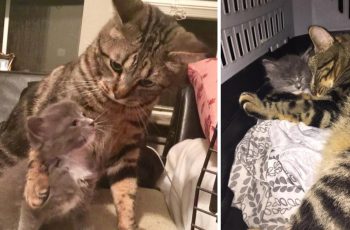 Andy the rescue cat must have remembered how scary it … 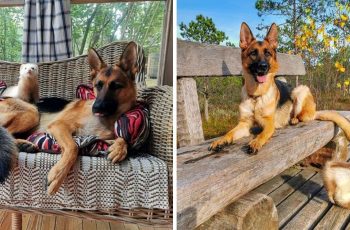 Love knows no boundaries and nothing proves that more than … 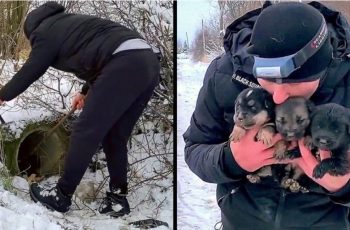